THE FORMULA was conceived by Fredrick, Aaron and Elijah Johnson out of a desire to write a story inspired by their real life family, friends and situations that had shaped their lives. Pushing the boundaries of the novel format, they wanted to create a new narrative style for a story about inner city kids, not unlike the late John Singleton, while deconstructing the pillars of the traditional “superhero” story line. Fans of titles like KICK-ASS, TITANS, and RIVERDALE, will feel right at home.

1990s Los Angeles, home of the most notorious drug kingpins—and heroes. One night First Responders rush to a fire downtown—a mission that quickly goes awry—killing the city’s greatest Firefighter, and leaving his wife and sons in the care of his best friend, and soon-to-be-Detective Marc Bronson.

10 Years later, Romeo and Jay Jones grow into your average, All-American teens. After a crime epidemic and a designer drug craze erupt in Bayview, Romeo and Jay take the law into their own hands as the vigilantes “Thunderstorm” and “Brigadier.”

With LAPD Homicide Detectives Marc Bronson and Angel Rivera, the Jones Brothers must find the formula to the perfect storm: and how the elusive crime-lord Dexter Dre pulls all the strings—or if there’s another enemy waiting in the wings.

We know you will enjoy this chapter, and we can’t wait to show you what’s in store! 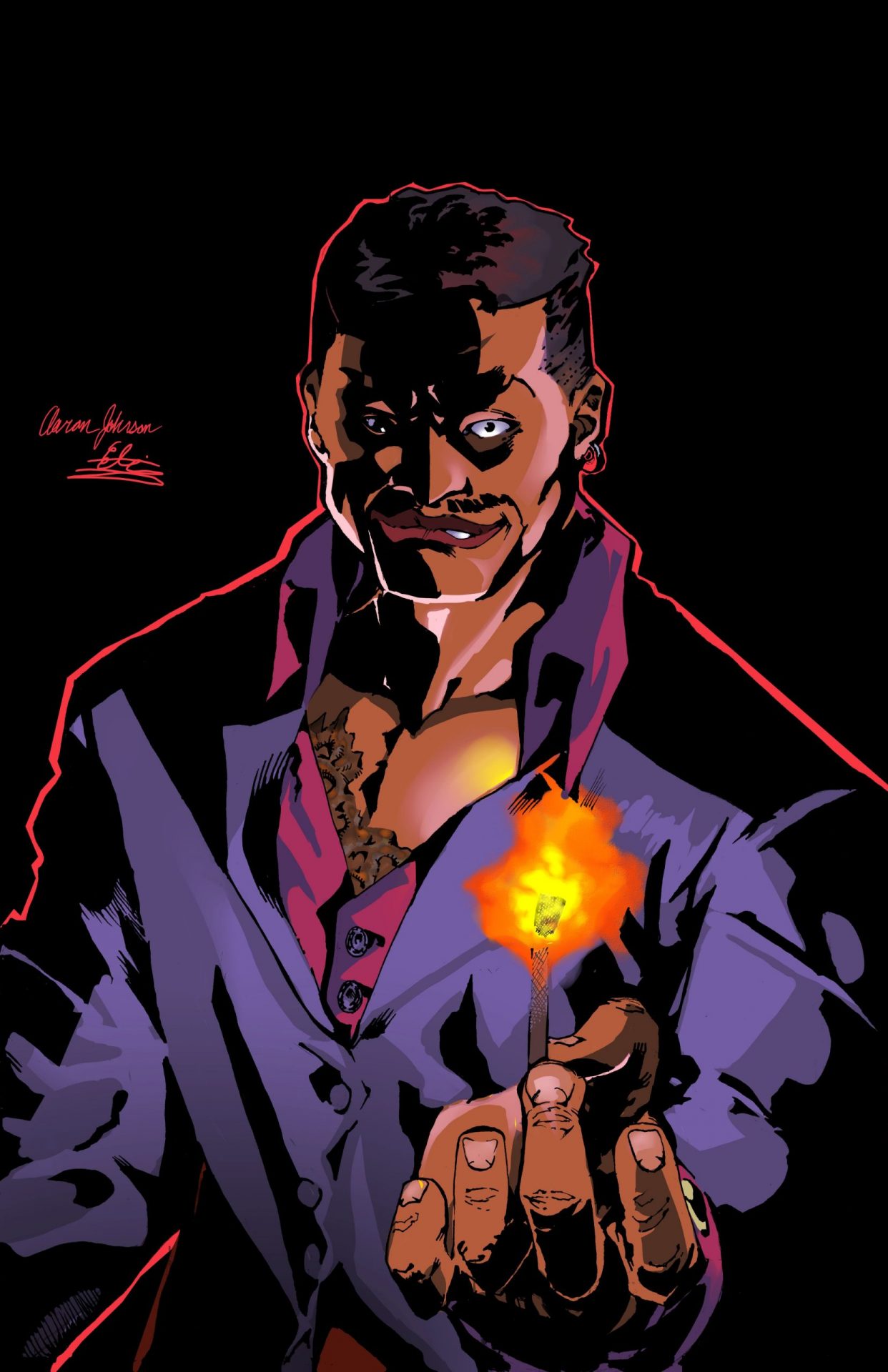 He’s something like the ghost of Christmas past, a ruthless figure with a face now warped and scarred by an apartment fire that took not only ASHTRAY’s life, but changed the Jones family forever. Dexter’s criminal empire may have survived his takedown, but will it survive his return? He won’t rest until he’s had revenge on his enemies and betrayers, and with a new product hitting the streets, all eyes point to him as the cause of the new crime wave sweeping Los Angeles. 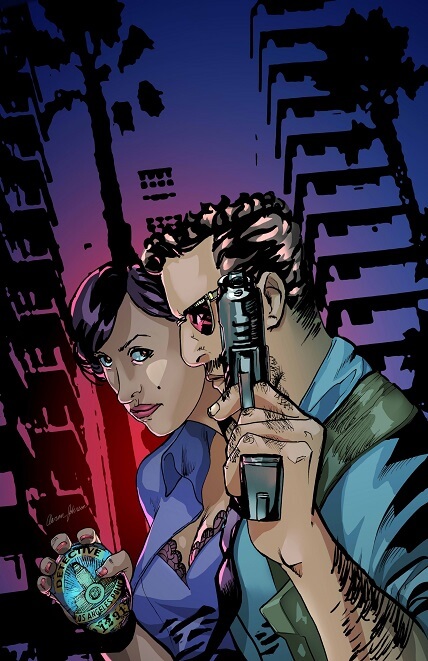 Maverick. Smart ass. Mentor to Romeo and Jay Jones after his late friend, “Ashtray” Jones passed. When Ash’s widow, Inez, is brutally attacked in her own nightclub by superpowered thieves, Marc takes his squad and vows not to rest until he can bring her attackers to justice. With the return of Dexter Dre and the recent crime wave sweeping the streets, he’s starting to realize the rabbit hole goes deep. After 20 years in the force, To crack this case, Marc has to battle a new generation of rogues. This time, he’s got backup… under the names: Thunderstorm and Brigadier. 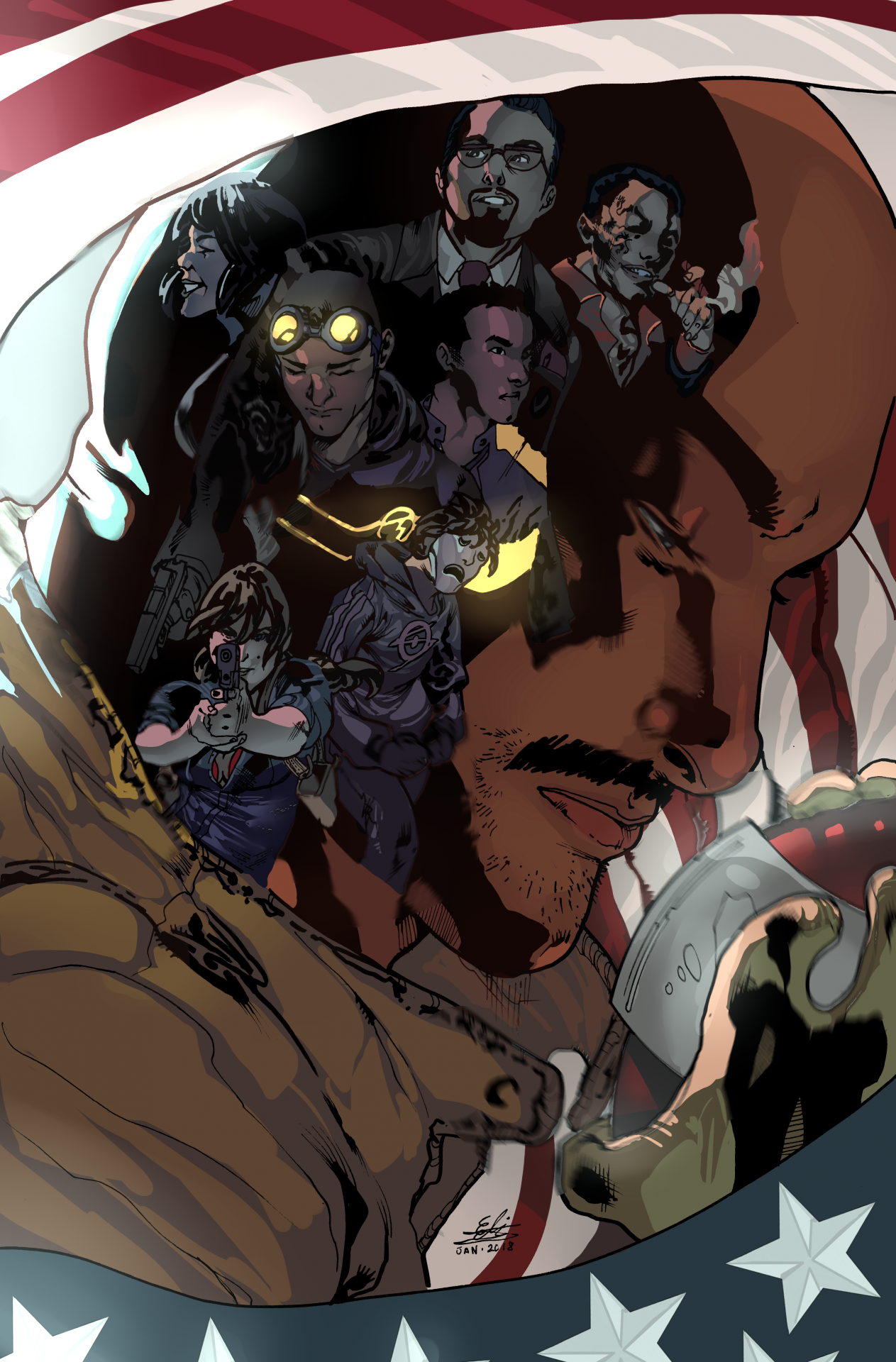 Ashley Jones got the nickname “Ashtray” from his fearless nature and his love of the heat. After coming home from the Gulf War, he became the LAFD 54th Fire Battalion Captain at the department for years. One fateful night, his team is called to Skid Row to a massive apartment fire. Though he saves the lives of many, he doesn’t survive the burns from the rescue mission. His surviving family relocates to Bayview, watched over by his dear friend Marc Bronson. That’s where our story begins… 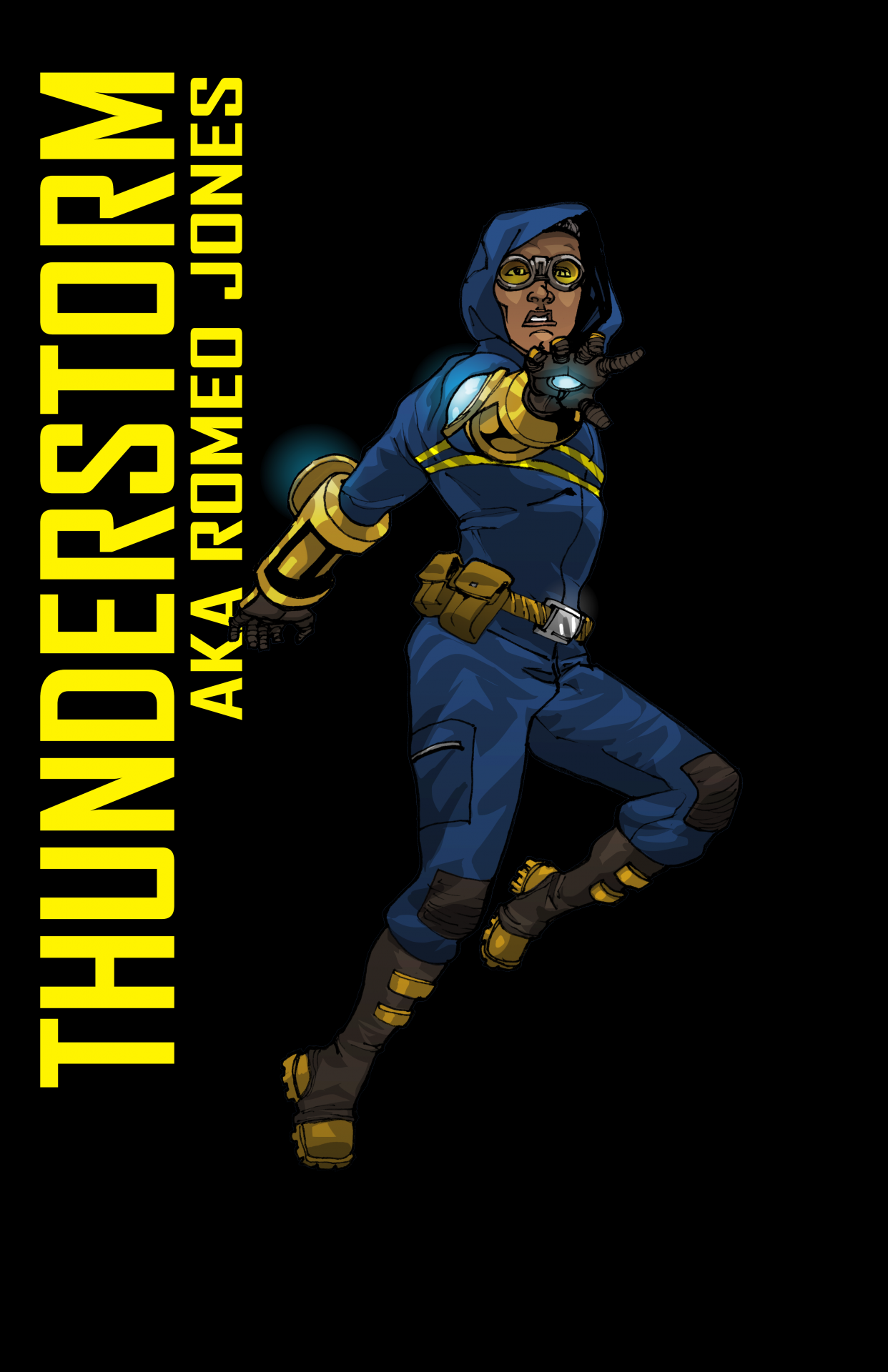 Romeo Jones AKA Thunderstorm is the older brother of Jay Jones. Sarcastic and rash yet intuitive, Romeo attends Bayview High and works at Chez Inez after school while banging out his own mixtapes on his free time with his brother and his best friend, Buster. However, he dreams of doing something great one day to honor his late father, “Ashtray” Jones, just isn’t exactly sure how. His simple life gets turned upside down after his mom Inez is attacked in her own nightclub by superpowered thieves and frustrated by the callous attitude of the police, Romeo and Jay take the law into their own hands. With Buster, Romeo customizes his father’s turnout uniform into a costume to mete out justice, as Thunderstorm. 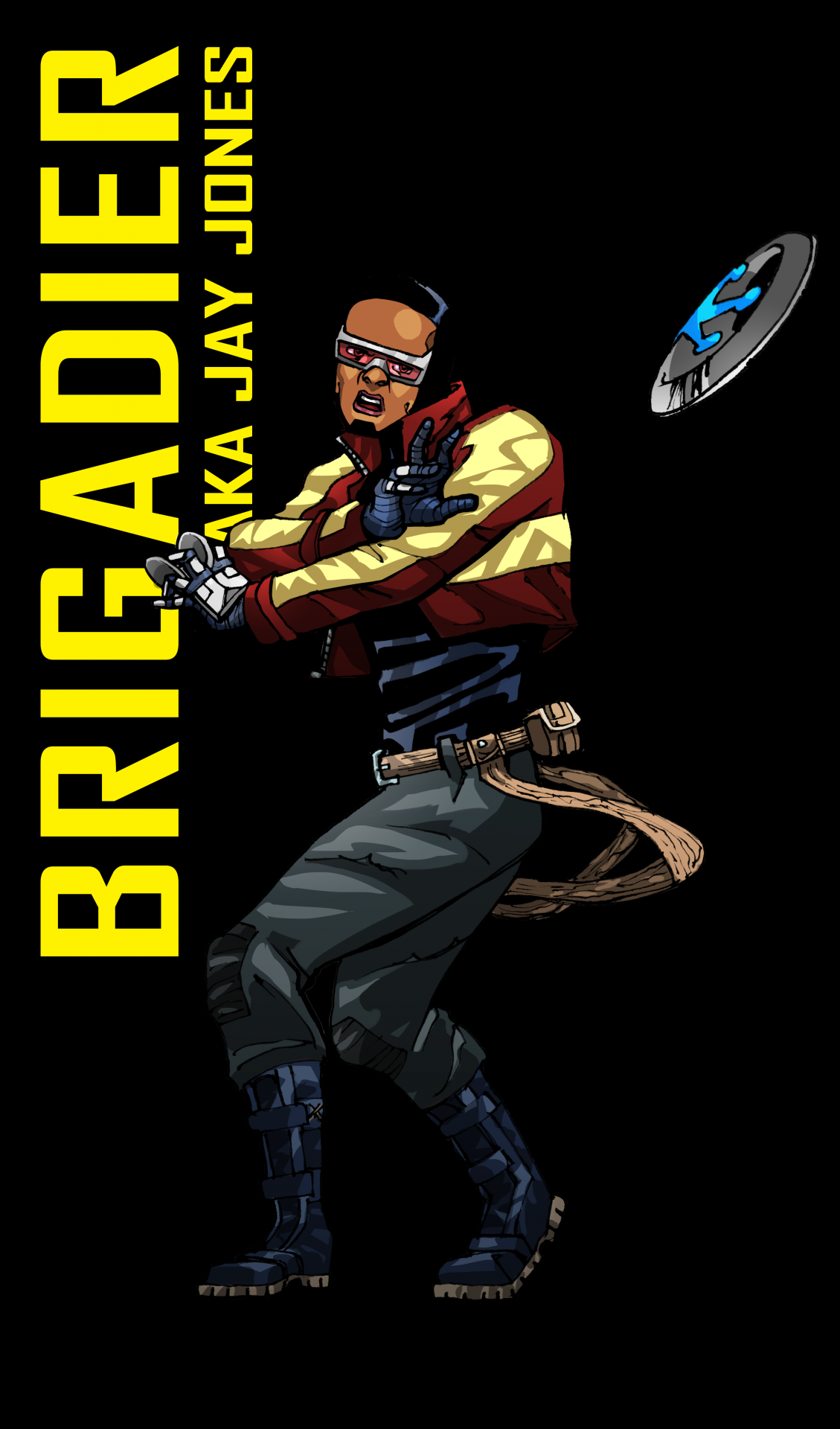 Jay Jones has big shoes to fill, not only as the son of the late great firefighter “Ashley” Jones, Romeo’s younger brother but as the newest quarterback of the Tigers at Bayview High School. While brave and headstrong, nothing prepare him for the attack on his mother by superpowered thieves and frustrated by the callous attitude of the police, Romeo and Jay take the law into their own hands. With Buster, Jay customizes his father’s turnout uniform into a costume to mete out justice, as Bridgadier, a nickname given to him by his late father. 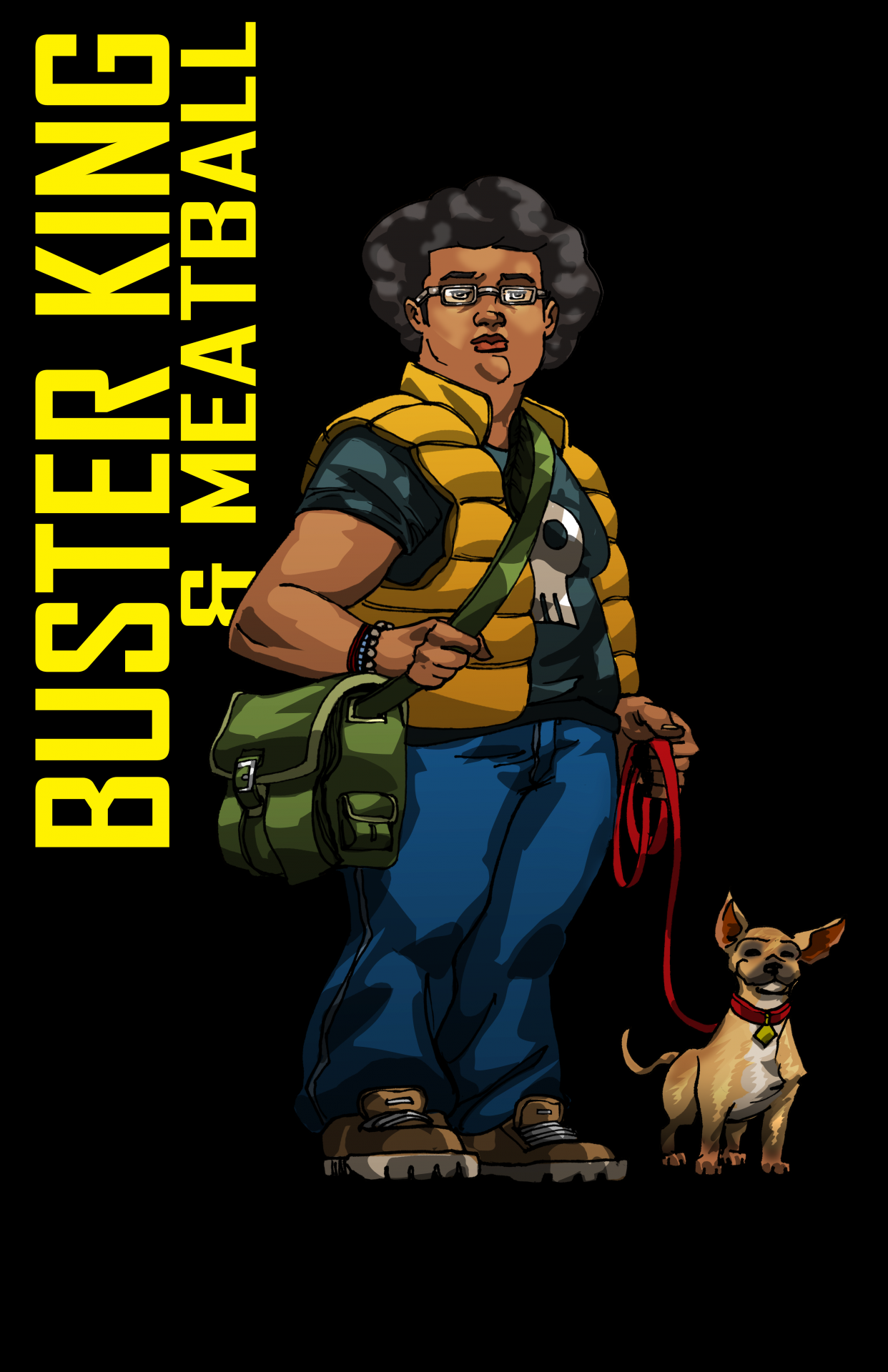 Buster King is your friendly neighborhood R&D specialist, music producer and pro gamer. As Romeo and Jay Jones’ best friend, he plays a big role in helping them design their weapons, costumes and providing them intel on the ground after the events of Chapter 1. Just don’t call him a sidekick. His pet Chihuahua “Meatball” never leaves his side. 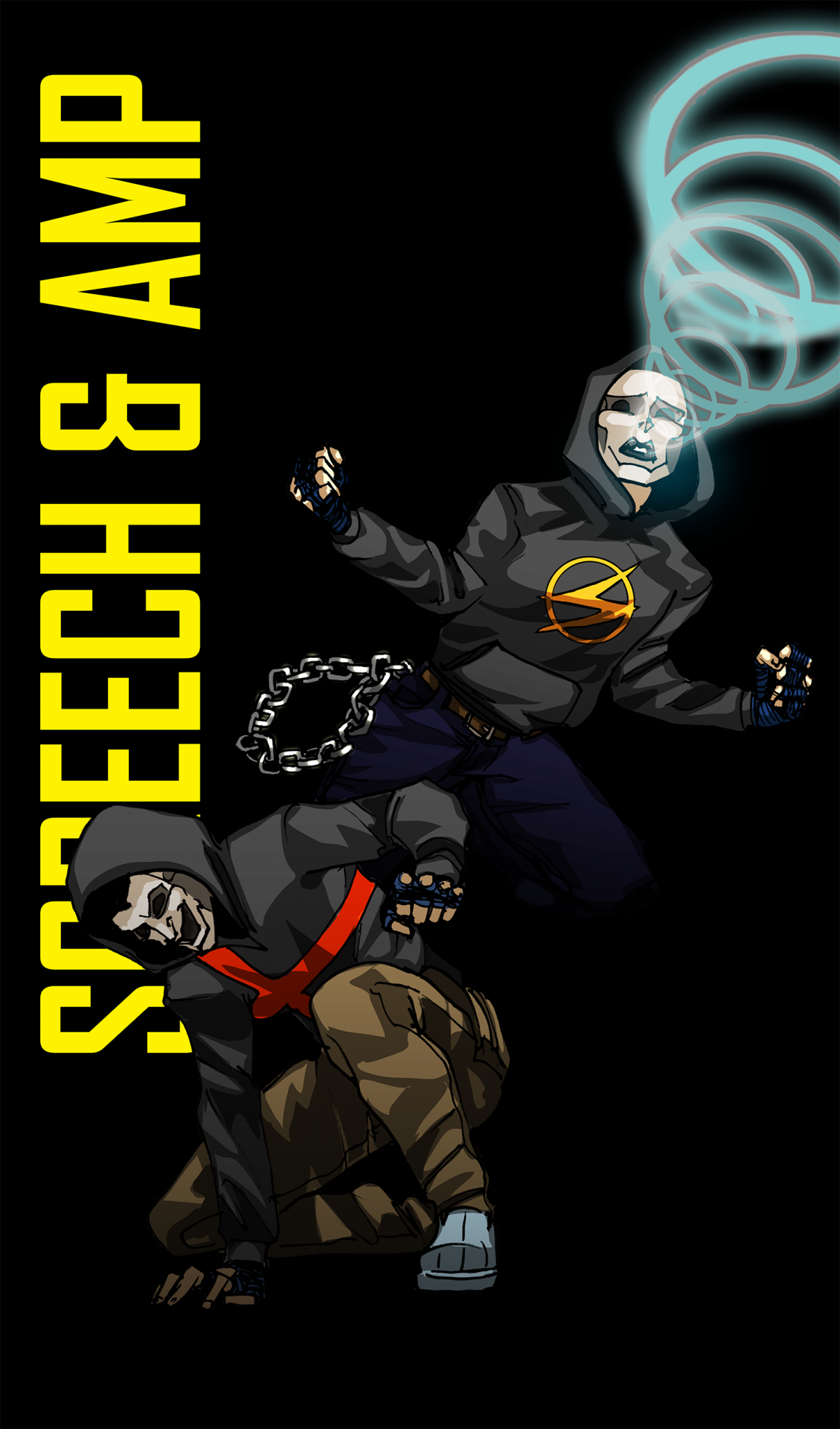 This dynamic duo is the newest of this generation of super powered “hoods”, leaving a path of destruction in their wake. Their names speak for them: with his voice, Screech can release powerful sonic attacks while Amp can amplify the intensity of any energy source or field… even from other people with these special abilities. The limits of their powers have yet to be reached, and after the robbery at Chez Inez, Det. Marc Bronson has made them prime suspects on his radar. 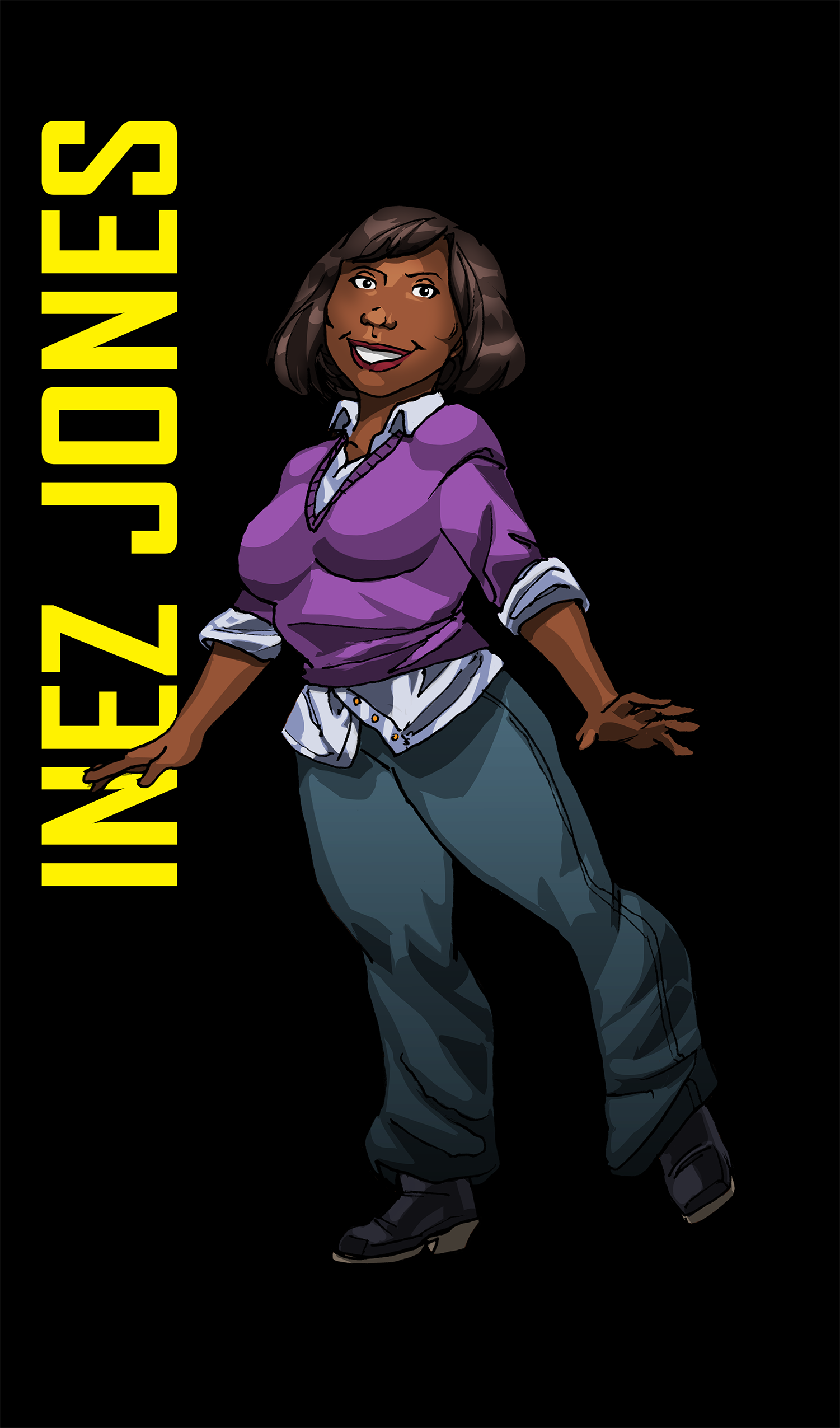 Not just the mother of Romeo and Jay or the widow of “Ashtray” Jones, Inez Jones is a notable figure in the city of Bayview. After her husband’s passing, she relocated the family from the suburbs of Woodland Hills to the inner city where she creates Chez Inez nightclub, and it grows to becomes a major hotspot in the community. So why would anyone ever attack her? This is the question the locals, the Jones and Det. Marc Bronson must answer. As the case grows cold and she rests in hospital, the Jones’ thirst for justice leads the siblings to become Thunderstorm and Brigadier. 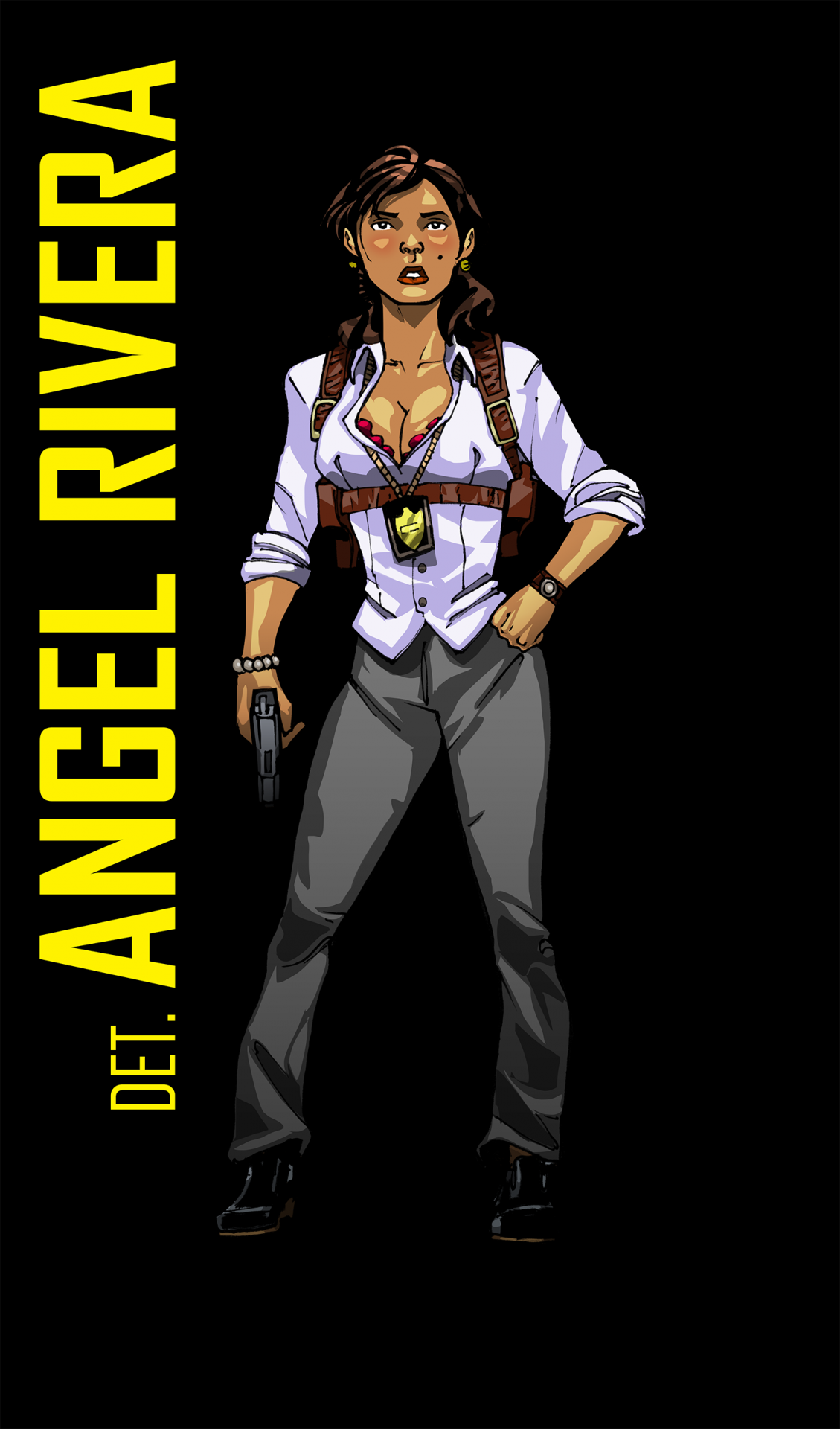 Angel is one of the youngest members of Marc Bronson’s unit. Her drive and mind for detective work rivals Marc’s but unlike him, she actually tries to stay within Chief Blake’s good graces. When super powered criminals attack Chez Inez, Angel is the only thing keeping Marc from going over the edge in his search for vengeance, and Angel may discover the key to the puzzle of all of the cases. If she survives this mission first. 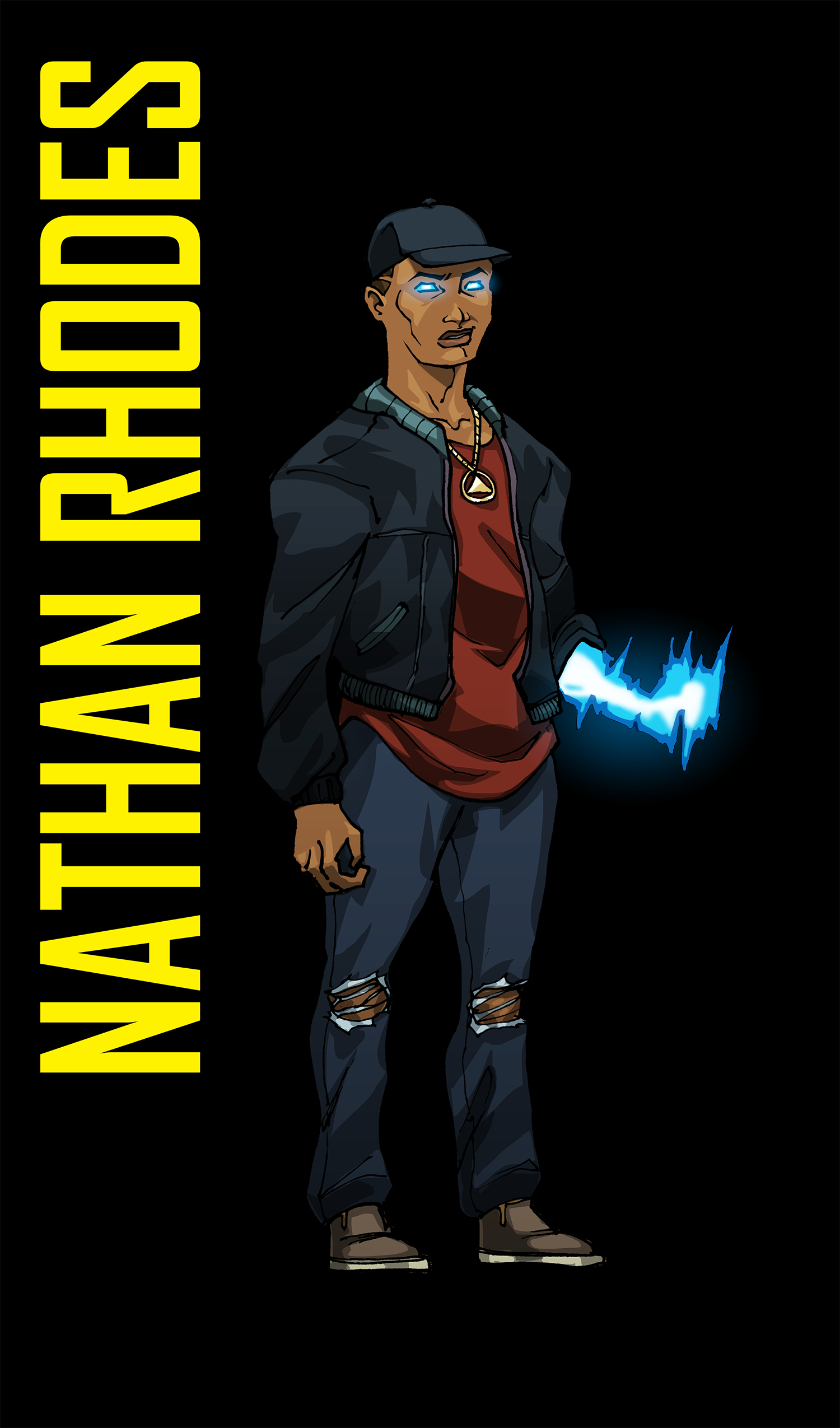 At first he was a common hood, young, reckless, without a family. After his mutation, he gains the ability to become untouchable, literally. He’s looking for his next “lick”, and Dexter Dre was more than impressed with Nathan’s demonstration of his newfound talents. The LAPD has made Nathan public enemy #1 after his most recent sighting downtown, but Nathan loves the attention and the challenge, and the streets are in need of a new leader. Is he next in line for the throne on the streets?